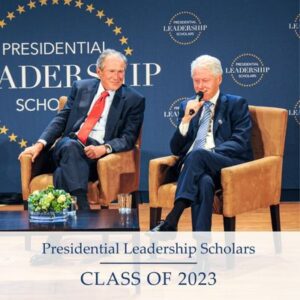 Stephanie Bothun, vice president and co-founder of Ascend Indiana, has been named one of 60 Scholars who will form the Presidential Leadership Scholars’ (PLS) eighth annual class. PLS serves as a catalyst for a diverse network of leaders brought togethe

r to collaborate and create meaningful change in the United States and around the world as they learn about leadership through the lens of the presidential experiences of George W. Bush, William J. Clinton, George H.W. Bush, and Lyndon B. Johnson and their administrations.

The class was selected after a rigorous application and review process. Scholars were chosen based on their leadership growth potential and the strength of their personal leadership projects aimed at improving the civic or social good by addressing a critical challenge or need in a community, profession, or organization.

Bothun co-founded Ascend Indiana, an initiative of the Central Indiana Corporate Partnership, in 2015. Ascend Indiana is a non-profit committed to making Indiana a place of economic opportunity for all. Ascend connects job seekers to good and promising career opportunities through an innovative job matching platform, the Ascend Network; catalyzes partnerships and provides consulting services to meet high-demand workforce needs through Ascend Services; and conducts research through Ascend Insights to enable systems-level change that positively impacts individuals throughout the state. Prior to co-founding Ascend, Bothun served as the director of Education Initiatives for the City of Indianapolis leading forward early childhood, STEM, and workforce efforts. Bothun earned her Bachelor of Science in Finance from Indiana University and a Master of Arts in Education from Marian University. 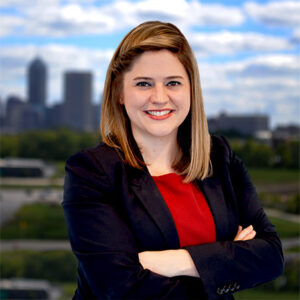 “It is an honor to be chosen as a Presidential Leadership Scholar (PLS) and have the opportunity to work with national leaders to further create economic opportunity and mobility,” said Stephanie Bothun, vice president and co-founder of Ascend Indiana. “During the six-month PLS program, I will focus my efforts on growing the youth apprenticeship movement in Indiana. Youth apprenticeship is a promising solution that enables high school students to gain a high school diploma, college credits, industry-recognized credentials and paid professional experience in high-demand industries (healthcare, information technology, advanced manufacturing and financial services) necessary to secure a good or promising job. I look forward to working with and learning from my peers to expand these programs to thousands of students and employers.”

“Congratulations to Stephanie on this well-deserved honor,” said Jason Kloth, president and CEO of Ascend Indiana. “Stephanie is an unassuming leader who collaborates across sectors to turn transformational ideas into a reality in Indiana. She uses her many passions as a former educator and her belief that all students deserve to succeed. She applies her outstanding leadership, intelligence and ingenuity to solve talent shortages that provide many more Hoosiers with opportunities to secure a successful future for themselves, their families and their communities.”

Over the course of the program, Scholars will travel to each participating presidential center to learn from former presidents, key former administration officials, business and civic leaders, and leading academics. They will study and put into practice varying approaches to leadership and exchange ideas to help strengthen their impact.

Scholars have consistently reported remarkable growth in skills, responsibilities, and opportunities for impact since the program began in 2015. For example, 94% of Scholars said their confidence in how they lead social change has improved as a result of PLS, and 98% of Scholars reported they are inspired to accomplish more since beginning the program.