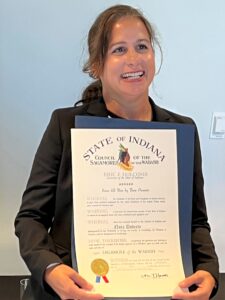 INDIANAPOLIS (Sept. 22, 2022) — BioCrossroads’ Board of Directors today named former executive vice president of strategy of BioCrossroads and managing director of the Indiana Seed Funds, Nora Doherty, as the recipient of the 2022 August M. Watanabe Life Sciences Champion of the Year Award. The prestigious honor, named in tribute to BioCrossroads’ late Chairman August Watanabe, was given to Doherty at today’s Indiana Life Sciences Summit and 20th Anniversary CELLebration.

Some of Doherty’s most significant achievements included developing a market for Indiana’s life sciences start-ups, including forming and managing funding mechanisms, engaging with universities and start-ups, and organizing new enterprises.

Recognizing the need for early stage or seed stage capital, BioCrossroads, began a Seed Fund program in 2005, with Doherty as Manager; followed by Fund II in 2012; and Fund III in 2018. These three Indiana Seed Funds, totaling $24.25 million, have invested in 32 life sciences start-ups since 2006. Those companies have gone on to raise an additional $796 million, more than 33 times BioCrossroads’ initial investment. In addition to returns to investors, the Funds have succeeded in unlocking considerable new (and lasting) entrepreneurial activity and talent, spurred the participation of significant additional investors and forged invaluable relationships with Indiana’s research universities, the State of Indiana and national venture capital firms.

In addition, Doherty has guided dozens of start-up companies with her advice, wisdom, and connections. She has also served on advisory committees for the Indiana Future Fund ($73M), INext ($58M), and Next Level Fund ($250M).

“Nora’s work with start-ups encouraged deep relationships with our research institutions, especially Indiana and Purdue universities, bringing some of their innovations to market. It has also led to productive collaborations between industry and academia,” said Patty Martin, president and CEO of BioCrossroads. “She is incredibly well regarded by many of the leading scientists and start-up CEOs in the state, as well as venture capital fund managers across the country. She was instrumental in putting Indiana’s life sciences entrepreneurial ecosystem on the map.”

In addition to BioCrossroads’ capital strategy, Doherty’s strategic insight over two decades has driven a number of successful research projects that helped identify a collective response to a changing environment, including the launch of the Indiana Biosciences Research Institute (2012) and activation of 16 Tech (2015).

Doherty’s impact is evident through the management of a research report that turned into an actionable and impactful project — Analytix Indiana. She conceptualized and facilitated the 2020 TEConomy Partners study titled Artificial Intelligence and Advanced Analytics in Indiana: An Initial Discussion of Industry Needs and University Capabilities. This study supported the creation of Analytix Indiana, an initiative to support the recruitment of academic talent, foster corporate and academic collaboration, create significant data assets to support both life sciences and advanced manufacturing, and establish an Indianapolis-based common place for university and industry engagement at the 16 Tech Innovation District.

Doherty has always had a strong entrepreneurial mindset. Prior to her work at BioCrossroads, she was a co-founder, vice president of operations and vice president legal, human resources and administration, and corporate secretary with Indianapolis-based Escient Technologies.

“It is difficult, if not impossible, to capture the full impact of Nora’s initiative, intellect and leadership on Indiana’s life sciences sector,” remarked Martin. “She has tirelessly, often from behind the scenes, ensured that ideas were activated and results achieved.”

To celebrate the work of these incredible contributors to Indiana’s life sciences industry and its 20th anniversary, BioCrossroads created a compilation of profiles of the Watanabe Life Sciences Champions – Innovating Indiana: The Trailblazers of the Life Sciences Industry.

You can view the document at www.biocrossroads.com.