Mike Langellier, TechPoint president and CEO, to step down

WATCH: A Message from TechPoint President and CEO Mike Langellier 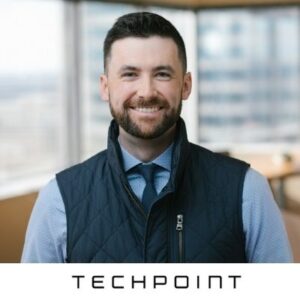 “We’ve accomplished what I set out to, which was to put Indianapolis on the map as a national tech hub and to build an organization that endows Indiana and tech companies here with a competitive advantage for successful growth,” Langellier said.

Langellier will remain at the organization through mid-May to support the succession search and transition of his role. TechPoint’s executive committee and the Central Indiana Corporate Partnership, of which TechPoint is an initiative, are leading a national search.

A Milford, Illinois native and DePauw University grad, the Orr Fellowship brought Langellier to Indianapolis, where he worked at Baker Hill and became part of the local startup community. Prior to joining TechPoint, he co-founded and later sold a software company, MyJibe.com. He was commuting between Utah and Indianapolis to work with the acquiring company when he was introduced to and inspired by the stories of how local leaders established a national reputation for Indianapolis as the amateur sports capital.

“Central Indiana’s tech community was on the rise,” he said. “I was inspired by the legacy of leaders who made Indy a racing capital and a sports capital. I had a conviction that it was time for Indy’s next “big thing,” that the “thing” should center around tech, and I should do something about it.”

When mentors Mark Hill and David Becker, then TechPoint board members, approached him about the CEO role, all fell into place.

“I’ve had the opportunity to work with Mike over the past six years, both as a TechPoint advisory board member, and as the board chair. Mike leads TechPoint as a true CEO, who is actively engaged with his stakeholders to understand their needs and the needs of the broader technical community. He distills these insights to create a compelling vision and overarching strategy and commits to drive results. His boundless energy, desire to make a difference, and high level of standards he sets for himself are unparalleled, which is why you want him as an asset on your team. He’ll be missed.”

“TechPoint has blossomed and boomed under Mike’s entrepreneurial leadership to become an expertly staffed, deeply and broadly funded, and highly respected authority on technology innovation, talent and growth for an entire state,” said CICP President and CEO David Johnson. “He has energized and focused all of us, throughout the community and across the CICP organization, and we will miss him greatly.”

“Mike is a true Indiana success story – from his Orr Fellowship experience to founding his own successful technology company to leading TechPoint for the last nine years. Our technology community has been fortunate to benefit from his creativity, vision, entrepreneurial drive, team building skills and ability to deliver on big ideas. Under Mike’s inspired leadership, TechPoint has transformed into the ultimate growth accelerator for our technology ecosystem,” said serial entrepreneur Scott Dorsey, managing partner of High Alpha, a member of TechPoint’s executive committee, and a past winner of the Trailblazer Award at the Mira Awards.

Langellier is quick to share credit. “These results were only possible because of impressive, committed TechPoint team members, board members, and funders,” he said. “I’ll forever remember the many relationships and be grateful for so many who bought into the vision. I’m proud of our programs, progress made, and my TechPoint teammates. TechPoint is the strongest and best positioned it’s ever been. I am entering a new chapter of life, and so is TechPoint. It’s the right time for me to hand the reins to another capable leader who can carry the mission forward,” he added.

Langellier hasn’t announced his future plans but says he’ll take time to evaluate, as well as travel and recharge with his family.

Candidates, or those with suggestions for candidates to succeed Langellier should contact Robin Goolsbee Robin.Goolsbee@divsearch.com at Diversified Search.