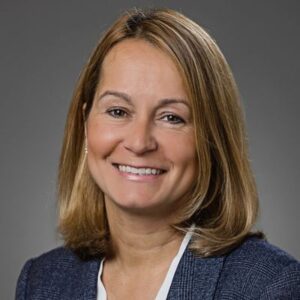 Kennedy has more than 25 years of experience in law, government and business, including the past decade at Cummins, first directing executive communications and then held leadership roles in the Engine and Power Systems businesses before becoming a vice president leading the Product Compliance and Regulatory Affairs organization. In addition, she had a successful law career at the former Baker and Daniels LLP; and was deputy mayor, director of economic development for the City of Indianapolis from 2000 to 2005. In 2011, she was a candidate for mayor of the City of Indianapolis.

“From her strengths in strategic communications, leading teams, and collaborating across corporate, government and non-profit sectors, Melina brings an extraordinarily diverse, relevant, and impressive background to her role as CICP’s CEO,” said Bryan Mills, president and CEO, Community Health Network, vice chair of CICP, and member of the CICP CEO search committee. “CICP is a unique organization that is advancing Indiana’s economy by working with a variety of different entities and on a range of initiatives. Her energy and enthusiasm about CICP’s future, as well as that of the state, will ensure that CICP’s important role to drive critical programs and projects forward continues.”

Kennedy represented the City of Indianapolis as part of a collaborative team of founding partners that established BioCrossroads, CICP’s life sciences initiative in 2002. In addition, in her role as deputy mayor of economic development, she commissioned the initial planning study that led to the beginning of work on 16 Tech.

Active in the community, in her current role as president of the Capital Improvement Board of Managers, she worked with a bi-partisan group of State leaders and legislators, City leaders and councilors, and Pacers Sports and Entertainment to secure a long-term commitment of the Indiana Pacers to Indianapolis.

“I have always had a passion for making a positive impact on my community, and this role will enable me to use my skills as a business executive and former government and community leader to make a difference in the place I live and love,” said Kennedy. “It’s truly an honor to follow in the footsteps of the former CICP leaders who have ensured this organization does what it can to drive prosperity for the state, and I look forward to leading the next chapter with the same goal and spirit in mind.”

Kennedy will start her new position in early February.

The Central Indiana Corporate Partnership (CICP) was formed in 1999 to bring together the chief executives of the region’s prominent corporations, foundations and universities in a strategic and collaborative effort dedicated to Indiana’s continued prosperity and growth. To advance this mission, CICP sponsors five key talent and industry sector initiatives, AgriNovus Indiana, Ascend Indiana, BioCrossroads, Conexus Indiana,  and TechPoint, each of which addresses challenges and opportunities unique to its respective area: agbiosciences, talent and workforce development, life sciences, advanced manufacturing and logistics, and technology. To learn more about CICP, visit www.cicpindiana.com.