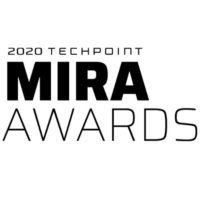 June 18, 2020 — TechPoint, the nonprofit, industry-led growth initiative for Indiana’s technology ecosystem, will recognize designer, innovator, entrepreneur and investor Kristian Andersen with the Trailblazer Award during a live broadcast of TechPoint’s 21st annual Mira Awards gala tonight (Thursday, June 18 beginning at 8 p.m. EDT). The awards are being held virtually for the first time and the public may watch at https://techpoint.org/bebold or on social media.

The Mira Awards—with presenting sponsors Eli Lilly and Company, Genesys, Infosys, Raytheon Intelligence & Space and Salesforce—celebrate the best of tech in Indiana each year, including people, products, companies and places. The Trailblazer Award recognizes visionaries whose contributions have had lasting and significant impact on the state and its technology ecosystem. Trailblazers are among the tech community’s most inspiring and influential players. They are innovative risk-takers whose achievements and bold leadership are catalysts for growth and success.

Andersen is a co-founder and partner at High Alpha, a venture studio that conceives, launches and scales business-to-business software-as-a-service technology companies. Prior to High Alpha, Andersen founded leading design and innovation consultancy Studio Science, which he sold in 2019. He co-founded Gravity Ventures, a seed-stage venture firm that raised six funds and made investments from 2008 to 2016, and he remains an active angel investor to this day. Andersen founded or co-founded several software companies, including Octiv (acquired by Conga), Lessonly, Visible and Pathagility. He also co-founded The Speak Easy coworking space and entrepreneur community, (serving as the organization’s first board chair), and was the first chairman of the Harrison Center for the Arts.

People may be familiar with Andersen because of his more colorful traits, including showing up to business meetings with a blue mohawk haircut and cowboy boots, or arriving in his monster truck dubbed “tall cotton.” These stories and the mythology of his bold, unconventional personality are absolutely true, but they may belie the earnestness of his dedication to excellence and the sincerity with which he approaches his roles as a leader, mentor, husband, father and friend.

Andersen and his wife of 18 years, Brandi, have six children and they live in Indianapolis. He is a graduate of Anderson University in Anderson, Ind., which named him “Alumni of the Year” in 2016.

“What makes Kristian unusual, rare even, is that his creativity stems from a deep sense of vulnerability,” said Sajan George, founder and CEO of Polk Capital. “I’ve never met someone who is just so genuine, comfortable in their own skin, authentic to who they are, and really vulnerable in the sense of being willing to take risks with expressing how they feel. If you have a conversation with Kristian there’ll be moments of vulnerability. It’s his secret power, or maybe his super power, that he allows himself to be vulnerable, which then unlocks incredible creativity.”

“Kristian is this amazing person and an absolute asset to our community. He thinks differently. He acts differently. And if you really look at his accomplishments, they’re incredible,” said Scott Dorsey, managing partner at High Alpha. The two first began working together 20 years ago when Dorsey had recently co-founded ExactTarget (now Salesforce) and Andersen was running his design firm Kristian Andersen + Associates (now Studio Science). “From starting Studio Science and founding The Speak Easy, to creating Gravity Ventures and bringing more investors into our community, to founding several startups and now being a founding partner at High Alpha; he’s just amazing!

“He’s an ecosystem builder who focuses on the bigger picture in many ways. I think he helps people dream bigger than they might be able to dream on their own,” Dorsey said. “And he’s also such an advocate, such a champion for our community. He really cares about Indianapolis and our tech community and it shows, and we’re all far better for it.”

“Kristian is and has been central to Indianapolis’ startup community. Many prominent entities wouldn’t exist if not for him. He has vision to see the potential in people and organizations, a craftsmanship to distill and articulate that potential, a provocativeness that stirs people to act and think differently, and a boldness to take chances on new things or people. I experienced it myself as a young professional new to Indy, and I still see it today,” said Mike Langellier, president and CEO of TechPoint. “Kristian is also attracted to underdogs and diamonds in the rough; two things that, especially 10 years ago, Indy’s tech scene very much was. Places need champions—trailblazers—like Kristian.”