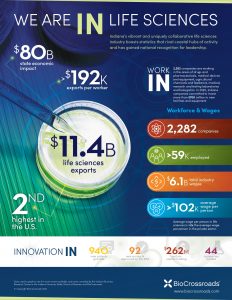 INDIANAPOLIS, (March 25, 2021) —   While COVID-19 continues to make the headlines, Indiana’s life sciences industry not only combatted the pandemic with testing, treatments, clinical trials, and vaccine manufacturing but remained committed to innovating and investing throughout 2020. New data provided to BioCrossroads by the Indiana Business Research Center (IBRC) at the Indiana University Kelley School of Business shows a thriving and growing sector. One of the most notable milestones: Indiana is the second highest exporter of life sciences products in the U.S. and has been for more than a decade.  In 2020, more than $11.4 billion of products were exported from the state, representing more than $192,000 of output per worker, the highest amount ever recorded.

The economic impact of the state’s life sciences industry reached $80 billion for 2020 driven by 2,282 companies across pharmaceutical, medical device and equipment, agbiosciences, research, testing and medical laboratories and biologistics subsectors employing 59,427 people. Ninety-two new products gained approval from the U.S. Food and Drug Administration, according to the IBRC.

“Indiana’s life sciences sector provides large investments in jobs, facilities, and innovation – all of which contribute significantly to the state’s public and economic health,” said Patty Martin, president and CEO of BioCrossroads.

In the recent study from Brookings Institution, State of renewal: Charting a new course for Indiana’s economic growth and inclusion, they refer to the state’s “world-class hub of advanced manufacturing, especially in biopharmaceutical medicines and related products.”  It also concludes that the life sciences and manufacturing sectors represent “a crucial source of know-how, leadership, competitive zeal, and good jobs.’”

“Brookings Institution’s assessment of our sector is just further evidence of its importance and our need to continue to focus on advancing the industry,” said Martin.

The average wage for the life sciences sector remained steady at just over $102,000 1 per worker, nearly double the state’s average wage, delivering a total payroll of $6.0 billion to the state.

In 2020, new and existing Indiana companies announced significant hiring and capital investment commitments with a total of $700 million in capital expenditures, including several multi-million projects with hundreds of new jobs, according to the Indiana Economic Development Corporation:

Indiana’s academic institutions continued their transformational research and received high levels of funding from the National Institutes of Health for the 2020 fiscal year:

This data, generated by the Indiana Business Research Center at the Indiana University Kelley School of Business and BioCrossroads, are the most recent available.