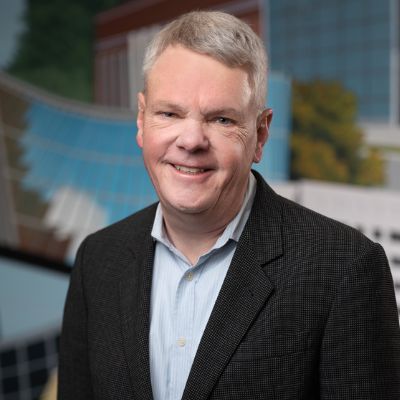 INDIANAPOLIS (June 27, 2022) –The Central Indiana Corporate Partnership (CICP) today announced that President and CEO David L. Johnson will retire from his leadership responsibilities at the end of 2022. 2022 marks the tenth year that Johnson has led the organization. He previously served as one of the founders and as the president and CEO of CICP’s life sciences initiative, BioCrossroads – a role he held from 2005 to 2019.

Johnson’s ideas, leadership and tireless efforts, both publicly and behind the scenes, have encouraged the vitality of the Indianapolis region and the state. He has also brought CICP widespread recognition of being “one of the most impactful business and civic leadership groups in the nation,” according to a 2019 study published by the Brookings Institution.

As an organization under Johnson’s leadership, CICP has grown from 30 to 113 people; added two of its six branded initiatives – AgriNovus Indiana and Ascend Indiana; and spearheaded a number of strategic projects that are advancing the growth of Indiana’s economy.

In a widely cited 2018 book, The New Localism, highlighting proven successful strategies for regional economic development, Bruce Katz and Jeremy Nowak devoted an entire chapter to CICP as “the leading U.S. example of networked governance.”  They went on to describe Johnson as one of a select few national leaders successful in building an organizational culture of “informed risk taking, experimentation, and continuous learning and innovation” with a priority to “deploy power rather than hoard it, make markets rather than follow them.”

“CICP has been duly recognized as one of America’s great economic development organizations for the 21st century, and that is due to the unique levels of engagement from our impressive CEO board members, our diversely talented professional team, and the strong financial support of our stakeholders,” Johnson said.  “I have been privileged to lead this organization over an important decade in the growth of our region and state.  I will miss day-to-day engagement with executive leaders and colleagues but look forward to continuing to make some sort of productive contribution to the significant work of advancing regional prosperity.”

As part of the CICP leadership transition, the organization has also announced that the leadership roles of president and CEO will be divided into two, with Chief Financial Officer and Chief Operating Officer Latoya Botteron assuming the role of President of the Central Indiana Corporate Partnership upon full board approval in August. Botteron will also retain her role as chief financial officer and continue to report to CICP’s CEO in this expanded position. Botteron has held the dual role of CFO/COO since 2019, and joined CICP as controller in 2010. In addition to continuing to lead the financial operations of the organization, her new responsibilities include overseeing the implementation of CICP strategy through the CICP core team and strategic initiatives; directing the funding development process; and managing the day-to-day activities of CICP’s senior management team, in close working collaboration with the CEO.

“David has unique insights into economic development and the needs of the community. His dedication to Indiana and getting things done has become the culture at CICP as the organization has a stellar reputation to take on important projects and make an impact on the region and state,” said Tom Linebarger, president and CEO of Cummins, Inc., and CICP board chair. “And his commitment goes beyond his role at CICP — David is often asked for advice and guidance by business and civic leaders around the state, as well as around the country. He is also a man of integrity and compassion, which is why so many people, including myself, admire him greatly and enjoy working with him.”

Johnson’s tenure at CICP began when he stepped forward twenty years ago as a community volunteer to help organize and launch BioCrossroads, CICP’s standing sector initiative to grow, advance and invest in the life sciences. His first noteworthy impact was as chair of BioCrossroads’ capital formation task force, where he organized and helped to capitalize the Indiana Future Fund I – a $73 million venture capital fund of funds focused on addressing Indiana’s historic shortages of venture capital through investments in promising Indiana-based biotech startups.

In 2005, he joined BioCrossroads as president and CEO, where he supported the region’s existing research and corporate strengths while also encouraging new business growth. One early accomplishment was the development of additional capital to meet needs for even earlier stage life science business funding via the $6 million Indiana Seed Fund I. Through Johnson’s additional capitalization efforts, Indiana Seed Funds II and III, totaling $17.25 million, followed in 2012 and 2018.

Under Johnson’s leadership, BioCrossroads also made significant progress to expand, diversify and promote Indiana’s life sciences sector and identified new opportunities through the establishment of new enterprises such as OrthoWorx, AgriNovus Indiana, and the Indiana Biosciences Research Institute.

During his tenure, he raised nearly $400 million in corporate, philanthropic, governmental and private equity funding to advance the State’s life sciences opportunities.

In a role that spanned his leadership of both BioCrossroads and CICP, Johnson was instrumental in developing a placemaking strategy for Indianapolis by organizing and spearheading the $130 million development of the 16 Tech Innovation District, an idea that had been discussed for 25 years, but finally came to fruition under Johnson’s leadership.

And in response to challenges raised directly by a number of CICP’s CEO members, Johnson has also helped drive the formation of additional strategic platforms and programs. These include a special CICP branded initiative, Ascend Indiana, addressing cross-sector employer demands for a sufficiently large and suitably skilled 21st century workforce; and an ambitious and still-evolving program, AnalytiXIN, bringing corporate and university leaders together around compelling opportunities in a common setting to establish the region as a credible place to develop and deploy game-changing strategic technologies, including data analytics and artificial intelligence.

“In these increasingly complex times, our city and state have been most fortunate to have had David Johnson leading such an important organization. His unrivalled intelligence and collaborative spirit cannot be overstated,” said N. Clay Robbins, Lilly Endowment’s chairman and CEO. “With a fulsome view of economic development, David has worked tirelessly and strategically on countless efforts to strengthen the prosperity and quality of life of residents throughout Indiana. And his many accomplishments are marked by his signature style of humility, intentionality and a dedication to service that has garnered the admiration of leaders across the state and country.”

More recently, Johnson’s work turned toward ensuring that Central Indiana leaders were informed and coordinated during the COVID-19 pandemic. Johnson quickly orchestrated and facilitated weekly CICP pandemic update teleconferences bringing together state officials, medical experts and leaders from the public and private sectors, as well as higher education, to share and receive updates and valuable information related to public health and the economy. Armed with this information, CICP board members briefed their own organizational leadership teams each week. Several members have cited these briefings as the most authoritative, informed and relevant information they received to make critical business and workplace decisions during an extended, tumultuous time.

Also, during the pandemic, Johnson responded to intensified issues of social injustice following George Floyd’s murder by bringing together a collection of leaders from the corporate community in Central Indiana to form the Business Equity for Indy Committee. The committee, a joint venture of CICP and the Indy Chamber, in collaboration with the Indianapolis Urban League, is comprised of a group of Indianapolis-based corporate leaders committed to advancing a fairer and more inclusive future for the city’s Black population and other peoples of color.

The Search for a New CICP CEO

CICP has engaged Jorgenson Consulting in the search for a new CEO. Interested individuals should contact Joan Jorgenson, managing director and principal, about the opportunity through her email address joan@jci-inc.net

The Central Indiana Corporate Partnership (CICP) was formed in 1999 to bring together the chief executives of the region’s prominent corporations, foundations and universities in a strategic and collaborative effort dedicated to Indiana’s continued prosperity and growth. To advance this mission, CICP sponsors six key talent and industry sector initiatives, AgriNovus Indiana, Ascend Indiana, BioCrossroads, Conexus Indiana, Energy Systems Network and TechPoint, each of which addresses challenges and opportunities unique to its respective area: agbiosciences, talent and workforce development, life sciences, advanced manufacturing and logistics, energy technology and transportation and technology. To learn more about CICP, visit www.cicpindiana.com.