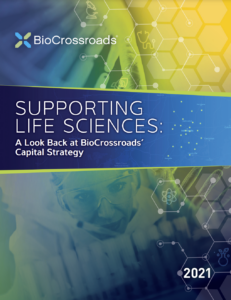 A new report: Supporting Life Sciences: A look back at BioCrossroads’ capital strategy details the investment results of these three investment funds that have provided important capital to Indiana’s life sciences start-ups over the last 15 years. The analysis looks at the impact of BioCrossroads’ capital strategy, which includes the development of:

The report also provides examples of funded start-up companies that went on to be acquired by large life sciences corporations. For example, BioLife Solutions acquired Sexton Biotechnologies, a 2019 spin out from Cook Regentech, for $30 million in September.  In 2013, Novo Nordisk acquired two companies, Calibrium and MB2, and opened an Indianapolis-based Research Center.

Additionally, BioCrossroads helped organize three fund-of-funds, the $73 million Indiana Future Fund (IFF) in 2003, the $58 million INext Fund in 2008, as well as the State of Indiana’s $250 million Next Level Fund. These funds have invested in more than 19 Indiana companies to date. Those companies have raised in excess of $1.2 billion, and several have proceeded to successful exit transactions totaling in excess of $3.5 billon. For example, Endocyte, one of the first companies funded by IFF, was acquired by Novartis in 2018 for $2.1 billion. Novartis built a $70 million facility in Indianapolis.

Arteaus was founded in 2011 to out-license an early-stage migraine drug discovered by Eli Lilly and Company. The medicine, now on the market with the trade name Emgality, was re-acquired by Eli Lilly in 2014 and generated sales of $362.9 million in 2020 up from $162.5 million in 2019.

“BioCrossroads has been fortunate to participate in the growth of Indiana’s life sciences sector working to connect capital with innovators from our research universities and corporate community alongside our partners at the State of Indiana and financial institutions who are making early-stage investments,” said BioCrossroads’ Seed Fund Nora Doherty. “We are beginning to see a generational impact as innovators move to follow-on opportunities.”

“It’s so important to have experienced talent involved in Indiana life sciences start-ups,” said Kristin Sherman, CEO of Kovina Therapeutics who received funding from Indiana Seed Fund III.  “Many company executives who received funding from Indiana fund-of-funds or the BioCrossroads’ Seed Funds have moved on to create and lead new ventures. The ripple effect of these funds is already building the next generation of entrepreneurial companies and talent.” Sherman was the CFO of Calibrium when they received an investment from Indiana Seed Fund II in 2012.

The report is available on the BioCrossroads web site.

BioCrossroads (www.biocrossroads.com) is Indiana’s initiative to grow, advance and invest in