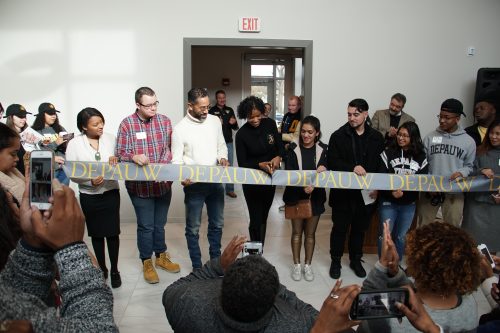 INDIANAPOLIS (April 6, 2021) — TechPoint, the nonprofit, industry-led growth initiative for Indiana’s technology ecosystem, will honor entrepreneur and business leader, philanthropist, “girl dad” and arbiter of cool Justin Christian, with the Trailblazer Award, during a live broadcast of the 22nd annual Mira Awards gala (Thursday, April 22, beginning at 8 p.m. EDT). Christian co-founded IT consulting firm BCforward in 1998, which he has since grown into the state’s largest Information Technology solutions and staffing corporation and one of the top ten largest black-owned companies in the country.

The Mira Awards—with presenting sponsor Salesforce—celebrate the best of tech in Indiana each year, including people, products, companies and places. The Trailblazer Award recognizes visionaries whose contributions have had lasting and signifxicant impact on the state and its technology ecosystem. Trailblazers are among the tech community’s most inspiring and influential players. They are innovative risk-takers whose achievements and bold leadership are catalysts for growth and success.

Employing more than 6,500 people in 47 states in the U.S., Puerto Rico, Canada, Europe and India, BCforward and its subsidiaries are major players in IT consulting and workforce fulfillment for the Fortune 1000 and governments worldwide.

“Justin’s built one of the largest minority-owned firms in the country,” said Bryan Smith, president of Smith Equity Partners. “He doesn’t necessarily report on that information, so I think a lot of people don’t realize that BCforward is based here in Indianapolis and they have employees all over the world. That is impressive by all accounts.”

Christian was raised in New York City and had dreams of being a jazz trumpeter before deciding to leave the East Coast to study computer science at DePauw University in Greencastle, Ind. It was there that he discovered his passion for business and met his wife Darrianne.

In November 2017, with a $1 million lead gift, the Justin & Darrianne P. Christian Center for Diversity and Inclusion was dedicated and officially opened on the DePauw campus. The center is home to the Association of African American Students and the Dorothy Brown Cultural Resource Center. It offers academic and cultural programming and services for students, advocates for social justice, and assists in fostering a safe and affirming campus climate for all students.

In a public letter in response to the killing of George Floyd, Christian announced that BCforward would give a $100,000 grant to the Central Indiana Community Foundation (CICF) to support its work in dismantling systemic racism. The company also gave additional funds to further support the work of the Justin & Darrianne P. Christian Center for Diversity and Inclusion at DePauw University.

“Justin was the chair of the search committee that brought me to DePauw to become the 21st president, and so my very first impression of Justin—we actually met over the phone—I thought to myself, ‘wow, he is really impressive,’” said DePauw University President Dr. Lori White. “He asked me really challenging, but interesting questions. At the same time, he really drew me in to be excited about the opportunity and the possibility of becoming, ultimately, the president of DePauw.”

Late last year, Christian was chosen by Ernst & Young as one of the Entrepreneur Of The Year® 2020 National Award winners. They cited his well-thought-out business plans and knack for improvising at the right moment as reasons they chose him for the honor.

“Justin is a risk taker. If you look at BCforward over the years you can really see where those risks have paid off, not just in business but with people,” said Doug Heath, senior executive vice president and COO at BCforward. “That story repeats itself multiple times. I recall one person in particular saying ‘I don’t know if I’m really ready for this.’ But that’s the culture Justin has built. We take the chances that have made all the difference for the company and more importantly for our people.”

Heath mentioned that when he first met Christian they both had three daughters and that Christian and Darrianne went on to have a fourth daughter. “He’s definitely a ‘girl dad’ and everything that means,” Heath said. “He’s an exceptional provider and fierce protector, and I think being a good father to daughters helps you see the world you want for them a little bit differently than everyone else. It shapes you as a person and leader.”

Andrea Bartlett, vice president, digital strategy and transformation at BCforward, confirmed Heath’s description of a company culture that takes a chance on people. “I wrote my job description for the role I’m in today and then I talked to Justin about it because I felt that there was a gap we needed to fill,” Bartlett said. “Justin was so supportive and really pushed me to continue and start doing this role and make it what I wanted it to be. I call him the king maker because he gives people opportunities. He sees things in you that you may not be aware of and he’ll give you these opportunities for leadership that will change your whole career trajectory.”

Besides knowing him as a business leader and tech industry titan, people may be familiar with Christian because of his personal style. Without vanity or pretention, Christian is well-known for his sophisticated fashion sense.

“Justin is comfortable in his own shoes—and they’re going to be very cool shoes, too,” said Kortney Cartwright, site lead at BCforward in Minneapolis. “Justin doesn’t try to be anybody else. He’s just Justin with that baked in, original New Yorker swagger, as well as his incredible education and knowledge. He’s a trailblazer forging the path ahead, but he’s also looking back to see who else he can bring along with him. He’s authentic and genuine, and just a very cool guy.”