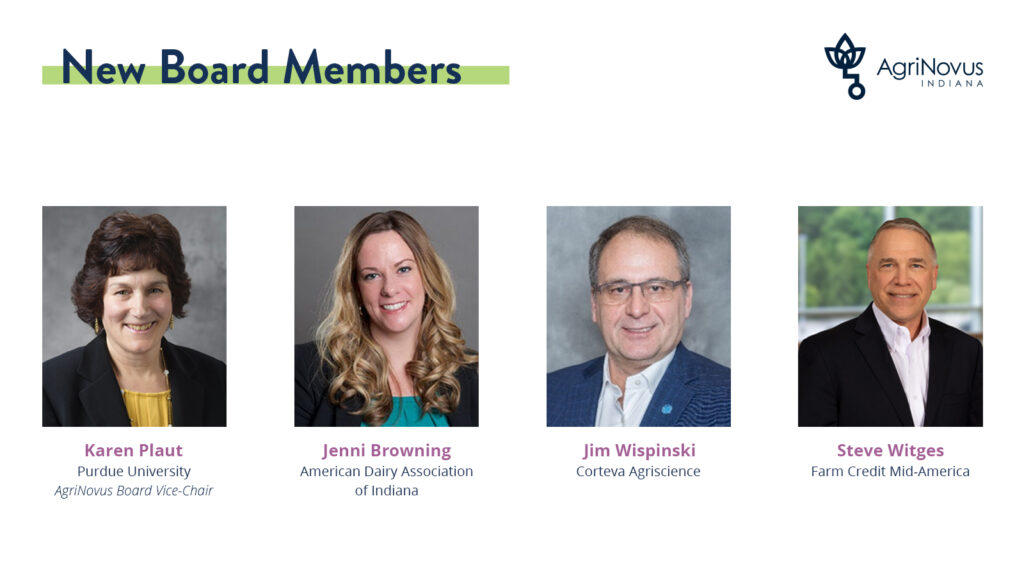 INDIANAPOLIS (Nov. 29, 2022) — AgriNovus Indiana, a nonprofit coalition focused on growing Indiana’s agbioscience economy, announced today its selection of a new vice chair and the addition of three new directors to its board of directors.

The board unanimously approved Dr. Karen Plaut, dean of Purdue University’s College of Agriculture, as its vice chair through 2023.  In addition, the board approved  Jenni Browning, CEO of American Dairy Association of Indiana, Jim Wispinski, vice president of Global Portfolios at Corteva Agriscience, and Steve Witges, senior vice president of Agricultural Lending at Farm Credit Mid-America.

“Indiana’s $52 billion agbioscience economy continues to record growth and strength thanks to the direction and support of the AgriNovus board of directors,” said Mitch Frazier, president and CEO of AgriNovus Indiana. “The selection of Dr. Plaut as our vice chair and the addition of executives from American Dairy Association Indiana, Corteva Agriscience and Farm Credit Mid-America provide even more strength and support as we work to achieve our bold ambition of adding $4 billion of revenue growth to Indiana’s agbioscience economy by 2024.”

Plaut is the dean of Purdue University’s College of Agriculture, overseeing academic programs within the college, the Indiana Agricultural Experiment Station, the Purdue Cooperative Extension Service and several state regulatory services. She is also a professor of Animal Sciences and has active research in mammary gland biology. Plaut was previously the senior associate dean for Research and Faculty Affairs in Purdue’s College of Agriculture and held faculty positions at the University of Vermont and Michigan State University, serving as the chair of the Department of Animal Sciences at both institutions. Plaut also spent a few years working with NASA as lead scientist for the Space Station Biological Research Project for the International Space Station. She holds a bachelor’s degree in animal science from the University of Vermont, a master’s degree in animal nutrition from Penn State University and a doctorate in animal science from Cornell University. Her postdoctoral studies were completed at the National Cancer Institute at the National Institute of Health. Plaut was named a Fellow of the American Dairy Science Association in 2020.

Browning serves as the CEO of the American Dairy Association of Indiana, which works on behalf of the state’s 700 dairy farm families to educate consumers on the benefits of dairy. Also a registered dietician, she is passionate about convening organizations to empower agricultural education and communication with the public, directly connecting them with where their food is produced. Browning is a graduate of Ball State University and has received their Outstanding Alumnus Award along with the Indiana Academy of Nutrition and Dietetics of Outstanding Dietician Award.

Wispinski is the vice president of Global Portfolios at Corteva Agriscience, leading all Crop Protection portfolios focused on asset management and growth  from product development through commercial launch stages. He previously held the role of vice president, Cereal and Broadleaf Crop Herbicide Portfolio, residing in Switzerland, and served as president and CEO of Dow AgroSciences Canada. He was recognized with the Queens Diamond Jubilee Medal for work in the agriculture industry on recommendation from Grain Growers of Canada. Wispinski received his bachelor’s of science in agricultural engineering from the University of Alberta.

The AgriNovus Indiana board of directors is comprised of 33 leaders from industry, academia, economic development and government.

AgriNovus Indiana is the state’s initiative focused on advancing the agbiosciences sector as a nationally recognized leader through business growth, entrepreneurial acceleration and thought leadership; strategic collaborations among corporations, industry associations, government and universities; the creation and support of new companies; and branding and targeted promotions to elevate the sector. AgriNovus Indiana is part of the Central Indiana Corporate Partnership (CICP), an effort dedicated to the region’s continued prosperity and growth. To learn more about AgriNovus Indiana, visit www.agrinovusindiana.com.