AgriNovus Indiana announces additions to its Board of Directors 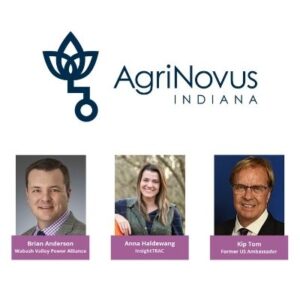 INDIANAPOLIS (Nov. 30, 2021) — AgriNovus Indiana, an initiative to fuel growth in Indiana’s agbioscience economy, announced today several additions to its board of directors.

The board unanimously approved new seats for the following:

Former AgriNovus board chair, Aaron Schacht, was also approved for an at-large seat representing Elanco’s recent carve-out focused on a microbiome research and development platform. A name for this independent biopharmaceutical company has not yet been released.

“AgriNovus has a bold ambition to fuel growth across Indiana’s agbioscience economy – from agtech and animal health to plant science and value-added food,” said Mitch Frazier, president and CEO of AgriNovus Indiana. “The leaders joining our board add even more strength and new perspectives to guide our work at such a critical time in the global food and agbioscience economy.”

Anderson currently serves as the director of economic development for Wabash Valley Power Alliance. He was previously the president and CEO of Middle Michigan Development Corporation. Anderson earned his bachelor’s degree in Urban and Regional Planning at Michigan State University and his master’s in business administration at Northwood University. He also holds an Economic Development Financial Professional certification and is a candidate for certification by the International Economic Development Council.

Haldewang is the founder and CEO of InsightTRAC, a company launched in 2019 that uses precision robotics and cloud-based data to help almond growers better manage and optimize their profit per tree. She previously launched Plan Bee, which was featured by CNN and TIME Magazine, and led to recognition by Forbes at their AgTech Summit in Indianapolis. Haldewang holds a bachelor’s degree in Industrial Design from Savannah College of Art and Design.

Tom is a former U.S. ambassador to the United Nations Agencies for Food and Agriculture and a seventh generation Indiana farmer. Tom received his associate degree in agriculture management from Texas A&M University, where he also attended the Texas Executive Agriculture Program. He received the 2012 AgriVision Award, which is given to those who demonstrate exemplary leadership to maximize the potential of Indiana agriculture. Tom is a board member of the Indiana Economic Development Corporation (IEDC), the Indiana Chamber of Commerce, the Farm Journal Agricultural Foundation, 246 Capital Investments, MAISCO and the Indiana State Department of Agriculture (ISDA).

These additions and changes to the AgriNovus Indiana board of directors brings total board membership to 35 leaders from industry, academia, community and government.

AgriNovus Indiana is the state’s initiative focused on advancing the agbiosciences sector as a nationally recognized leader through education, research and talent development; strategic collaborations among corporations, industry associations, government and universities; the creation and support of new companies; and branding and targeted promotions to elevate the sector. AgriNovus Indiana is part of the Central Indiana Corporate Partnership (CICP), an effort dedicated to the region’s continued prosperity and growth. To learn more about AgriNovus Indiana, visit www.agrinovusindiana.com.