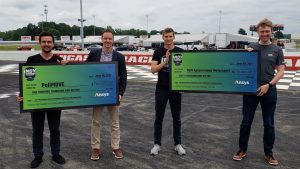 The race can be viewed on the IAC website.

PoliMOVE took first place and was awarded $100,000 (USD); and TUM Autonomous Motorsport was awarded $50,000 (USD) as the runner-up. PoliMOVE, hailing from Politecnico di Milano (POLIMI), Milan, Lombardy, Italy, is part of the MOVE research team from the Dipartimento di Elettronica, Informazione e Bioingengeria (DEIB) at POLIMI which is the largest school of architecture, design and engineering in Italy. TUM Autonomous Motorsport, from Technische Universität München (TUM), Munich, Bavaria, Germany, is well versed in autonomous transportation through its affiliation with TUM’s prominent Institute of Automotive Technology.

A series of simulation races organized by Ansys, the exclusive simulation sponsor of the IAC, were a critical first component for the teams as they develop the artificial intelligence (AI) software necessary to compete with the Dallara AV-21 racecars in the IAC race, currently scheduled for October 2021 at the Indianapolis Motor Speedway (IMS).

“Simulation enables these teams to design software they will use to control the physical racecars,” said Matt Peak, managing director at ESN. “It gives teams the freedom to be creative and agile in how they approach a very complex problem, especially edge-case scenarios. We partnered with Ansys because there is simply no company in the world better at simulation — we couldn’t do this without the solutions, talent and passion they bring to the IAC.”

“Engaging with the academic community through challenges like the IAC allows Ansys to empower the next generation of engineers to accelerate AV commercialization,” said Rick Mahoney, senior vice president of worldwide sales, marketing and customer excellence at Ansys. “The teams have not only taken advantage of our solutions with technical ingenuity, but they have done so despite challenging conditions created by the COVID-19 pandemic. We cannot overstate how impressed we are by what these teams have accomplished already.”

More than 500 undergraduate and graduate students, PhDs and mentors who excel in AI software registered for the IAC, representing 40 universities in 11 countries on four continents and 14 U.S. states. Seventeen teams competed in the Ansys IAC Simulation Race, with seven advancing to the June 30 simulation finals.

Inspiration for the IAC was the 2004-2005 DARPA Grand Challenge, which led to the advancement of new technologies and invigorated the prize challenge model of promoting innovation. The IAC prize competition goes further to speed the commercialization of fully autonomous vehicles and advanced driver-assistance systems (ADAS).  The IAC is a formidable competition to excite the best and brightest university students from around the world to engage in hands-on engineering firsts.

About the Indy Autonomous Challenge

The Indy Autonomous Challenge (IAC), organized by Energy Systems Network and the Indianapolis Motor Speedway, is a $1.5 million prize competition among universities to program Dallara AV-21 racecars and compete in the world’s first autonomous race event at the famed Indianapolis Motor Speedway currently scheduled for October 23, 2021. The primary goal of the IAC is to advance technology that can speed the commercialization of fully autonomous vehicles and deployments of advanced driver-assistance systems (ADAS). These enhancements will lead to increased safety and performance in all modes of racing and commercial transportation. In addition, the competition is a platform for students to excel in Science, Technology, Engineering and Math (STEM).

For more information about the IAC visit: www.IndyAutonomousChallenge.com. Join us on social media @IndyAChallenge; hashtag: #IAC2021